We’ve just redone our website and the first blog I published online, before I even had a blog, needs a new home.  The following paragraphs were posted on our old website under “Articles by Dr. Wall”.  Unlike a blog that gets further and further down the chain as new ones get posted, this was the first on the list for a long time and received a more attention.  Over the years a number of new clients had told me that this article influenced them to call us, because they wanted help not to live this way!  Good for them.  Selfishness feels great, but the end result is a personal kind of hell designed in your own image.  You aren’t a big enough god to give yourself satisfaction.  There might be a better way.

So enjoy this reprint…and go, thou, and rid selfishness from thy life for good.

My son Brandon, lives in Omaha with his wife Philly and 3 day old son, Alyas (congratulations to Mary Sue and I…our first grandchild!  EEEHAA!).  We visited them right after Alyas was born.  What fun! 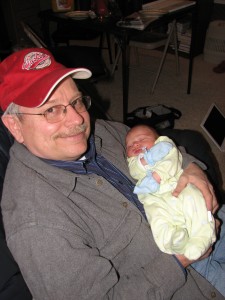 Dr. Bing Wall with his 4-day old grandson, Alyas William Wall, at the time when this blog was written, April, 2008

Brandon is a seminary student and planning to go on to do more graduate work in philosophy.  He often talks with friends his age who are thinking of getting married and he told me he’s been able to summarize what it takes to be married in one sentence.  Since I work with people in this area for a living, I was interested in how he’d decided to succinctly put one of the world’s great mysteries.  He tells them: “Don’t get married if you like being selfish.”  I like that.

Don’t get married if everything has to go your way.

Don’t get married if you think you are right all the time.

Don’t get married if you think when someone disagrees with you they are attacking you.

Don’t get married if love means to you how you make me feel.

Don’t get married if you don’t have a servant spirit and you can’t do something for someone else without wanting something in return.

Let’s take Brandon’s concept one step further: what if you are already married and you tend to be selfish?   If everything has to go your way (and rarely will that happen to anyone under any circumstances), then you will be resentful and harbor ill-will toward your spouse because they will constantly be disappointing you.  This will play out it one of two ways: you will either shut down and withdraw from your spouse (not come home; be on the computer all the time;  spend time with friends but not your spouse; give your heart and time and energy to your kids or career, or affairee or pornography or your race car or your business or job or hobby and not your spouse, watch TV in a separate room; not sleep together or go to bed at different times; hunt and fish to extremes; read romantic novels constantly [Great.  Now you’ll have more reasons to despise your spouse because they aren’t making you as happy as the wonderful people in your unrealistic fantasies]) OR you’ll lash out and say mean things and any little thing will set you off and you’ll be hollering about this or that and you’ll have that grimace on your face like the elementary school principal did when you were in third grade and he stood at the end of the hall when you went to lunch with his arms folded and glared at you like you were evil warmed over and you cowered and avoided him like the plague and your kids and your spouse will treat you in kind.  And then you will be soooo surprised when your spouse has you served papers for irreconcilable differences when basically the differences were that one, but more likely both of you were selfish and self-absorbed and everything had to go your way and if it didn’t’ life was unfair and you withdrew or fought and why live like that and so you divorce and then you meet another selfish person like yourself and marry them, too, and then the whole thing repeats itself only this time it’s going to be a lot less longer that you will take that crap and you give up on your second marriage much sooner than you did on your first because you know now how to divorce and that somehow you can survive and after all I just need to be happy and since you can’t make me happy and I don’t need another kid (I have enough already), because one is too selfish to help and the other is too selfish to help without building up resentments, I may as well divorce you because you’ll never change, because the fact of the matter is that selfish people don’t change except to become more selfish, more self absorbed, more right, more entitled, (“I won’t just settle!”) and I’m not going to go through that anymore.  So you divorce (again) in your stubborn pride and actually feel good about it, because I just need to do what will make me happy and we were just two different people and we just grew apart and you never listened and you’d never change anyway and I don’t want to have to go through this again in a year so enough already, but I’ll never marry again because that’s too painful, so I’ll just live with people and rip their hearts out without marriage and call it a day.

“If you seek your life to save it, you will lose it; if you lose your life for my sake (Jesus said) you will find it.”

“Whoever wants to be great among you must first be a servant.”  (Jesus said this, too.)