Some of my most cherished memories as a child occurred while reading Dr. Suess. Even to this day, I sometimes try to speak as if I am a character in one of his stories. However, seeing as I am not good at rhyming, these occasions often end before they begin.  Many of us can recall Dr. Suess’ The Cat In The Hat or Green Eggs and Ham, but many us may have never heard of the story entitled, The Zax. By far, I favored this one more than others as a child. I am not totally sure why. Perhaps the length of the story appealed to my desire to end ‘reading time’ as fast as possible, so the conquering of my older brother and sister could continue in whatever game we were playing at the time.  Needless to say, until I had my own children, I had long since forgotten about The Zax.. Curiously, as I would read each story again twenty years latter, I noticed that I had lost many of the simple truths that Dr. Suess taught me. In particular, the message of The Zax stood out to me more than the others. How did I ever forget this one? If only I would have remembered this story while my wife and I were planning our wedding or basically every day after! It is because we often forget the simple truths of life learned as children that I would like to share the story of The Zax with you and then apply it to our marriages.

Check out this cute reading of the story:

The Story of The Zax begins by stating there were once a North-Going Zax and a South-Gowing Zax making tracks in the prairie of Prax. 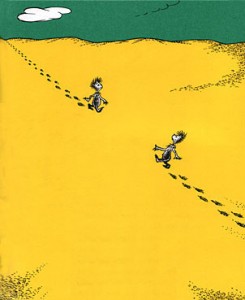 Unfortunately for both of them, their tracks lead each to an impasse where they stood face-to-face and foot-to-foot. Now in a normal situation such as this, the vast majority of us would simply say “excuse me” and allow the other to pass by. Certainly this may involve us moving to the right or the left or east or to the west. Such a step just doesn’t seem all that inconvenient in the grand scope of things. In fact, many of us, I hope, would see the notion that the other must step aside for us as being simply silly. 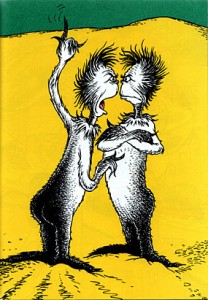 There are a few, however, who are reading this blog, who might take the opportunity to put this fellow in his place. Such people might say something like “Who’s in whose way?” and insist on the other moving aside.  Such was the arrogant response of our South-Going Zax. Not surprisingly, this response led to the obvious reaction from the North-Going Zax—namely, an escalation of arrogance and pride expressed through the puffing up of his chest. As many of us might recall, the North-Going Zax states emphatically, to prove his declaration to always go North, he will remain where he stands for fifty-nine days!  I am hoping at this moment that those who wished to challenge the North-Going Zax will see that it is sheer folly to persist in making a stand, but not so, for the South-Going Zax. He ups the ante to fifty-nine years. He justifies such a sacrifice of time because as a young boy he learned in South-Going school to “Never budge in the least! Not an inch to the west! Not an inch to the east!”  In fact, he contends he will not budge even if it makes the whole world stand still.

So what happened to the Zaxes?  As many us may know (either from our childhood or from reading time with our kids), the world did not stand still but simply built highways around the stubborn Zax, who remained pillared in their tracks. While the world was moving on, the Zaxes stayed, because they both thought they were right. They lingered because they both thought the other to be wrong. They remained in their tracks neither going Northward nor Southward in the prairie of Prax. Thus, both of them were unable to fulfill their purposes, because neither of them was willing to work with the other to achieve their goals. Instead of working as a team, they became archenemies wishing evil for the other. Did they not recognize that in due time the South-going Zax would become the North-Going Zax and vice versa?  Did they not recognize both would mutually flourish if they would humbly allow the other to pass? Could they not see in the grand scope of things their mission to only go Northward or Southward was simply a ridiculous notion the rest of the world only saw as an inconvenience?

While many of us read this story of Dr. Suess and smile at the simplicity of the lesson, not many of us seem to be able to learn from it. We think it is utter stupidity for the Zaxes to be so stubborn, but how many of us have similar reactions with our spouses? We don’t want in the moment to show a sign of weakness or vulnerability, or we just want to be selfish and not help our spouses with the task they wish to get done. Perhaps we feel they are asking too much of us, or since we had a rough day at work or at home, we have ‘earned’ the right to be callous with the children or spouses. Perhaps we are annoyed or want to pay back our spouses for all the times they shut us down. Perhaps we want to get their attention by stubbornly withholding sex, time, meaningful conversation, or money. Perhaps we have been hurt by them and are unyielding to make any attempts to reconcile, unless they first grovel for mercy. Perhaps we wish to justify our own failings by berating our spouses’ tiny mishaps as if they were horrendous catastrophes of the first degree. Or, perhaps we are just having an ‘off-day’. However, no matter how justified we may think we are in “putting our foot down,” more than likely our spouses are thinking the same thing about their request, reactions to our cold-heartedness, or their day. What then?

My suggestion for both of you at that moment is to have a little humility and truly try to wish/desire/will the good of your spouse. Pause for a moment and reflect upon where your spouse is coming from. Give them the benefit of the doubt. Stop letting your spouse push your buttons by learning to control your emotional reaction. Do this by returning bitter words with kindness and aggressive attitudes with meekness. Do all that you can to truly love your spouse.

At the end of the day, you are responsible for your actions not your spouse’s. Remember that to love your spouse may entail letting him have some freedom (ex., letting him go out with friends), expressing your feelings and thoughts more, being home more or leaving home a bit, being more gentle or even standing up for yourself every now and again. Whatever it is, you must discuss it with your spouse. Don’t just assume she knows. Also, it is important to choose your battles. But it is equally important to conduct your battles in honoring manner. Truly ponder the Apostle Paul’s words before you take your stand:

Love is patient, love is kind. It does not envy, it does not boast, it is not proud. It does not dishonor others, it is not self-seeking, it is not easily angered, it keeps no record of wrongs.  Love does not delight in evil but rejoices with the truth. It always protects, always trusts, always hopes, always perseveres. Love never fails.

Let me conclude with a finial thought on the nature of stubbornness.  This ability to be stubborn is an astonishing trait that all humans possess. It disposes all of us to follow a particular path or course regardless of how destructive that path or course might be.  Despite all evidence to the contrary, you and I will persist in our opinions, actions, feelings, and judgments to the point of destroying our lives (be that financially, physically, or spiritually) and dissolving our relationships (be they coworkers, friendships, extended family, immediate family, which includes our marriage).  At the moment when this trait magnifies itself, the majority of us (if we are honest with ourselves) will simultaneously recognize the irrationality and insanity of the opinion, action, feeling, or judgment while also tenaciously rationalizing and hardening our wills against all opposition—be that our conscience or some other person. In fact, there is something in us that longs to be able to ‘give-in’, ‘submit’, or at least ‘consider’ others’ options. But, more often than not, this is quickly suppressed to the deepest regions of our psyche. Overtime, if this sense of longing to ‘give-in’ be stifled long enough, we will find ourselves in a prison of self-absorption where we will be in a state of isolation from others and also from ourselves. The reason the isolation extends to us as well, is because we tirelessly justify ourselves to ourselves for why everyone else is to blame.   Think about it: What were the Zaxes thinking about the entire time they stood glaring at the other? In the end, the world will go on, but you will stand still alone.

So the next time you and your spouse begins to spar, ask yourself this very pragmatic question: what does my marriage (NOTICE I did not say you) have to gain from me taking my stand?