A recent article in The Wall Street Journal (“When Twittering Gets in the Way of Real Life”) discussed how easy it is to get lost in the new media, only to find we’ve lost our relationships along the way.  Do we really need one more distraction?

It used to be marriages suffered in quality after the birth of children.  Then it was when children became teenagers.  Now we can trace our marital happiness along the lines of whatever new electronic gadget or medium with which we succumb.  Family theorists will one day talk about the radio stage, then the television stage, then the VCR stage, the video game stage, the PC stage, the cable TV stage, the cell phone stage, the email stage, the satellite TV stage, the PDA stage, iPhone stage, XBOX stage, the Facebook stage, the Netflix stage, the Twitter stage, the Online Multiplayer Interactive Game stage, and the iPad stage, with no end in sight (I’m sorry if I goofed up the order.  I didn’t research the start dates of all these, but did it from memory.  You get the idea.).  There’s no end to the kind of things that can keep us from interacting with our spouse or our kids or anyone else in real life, either.

But, ohhhhhh.  We’re so fulfilled.  Really?  Every conceivable pleasure is only a click away and we call ourselves happy?  Just because every moment is FILLED doesn’t mean we are FULFILLED.  Certainly marriage takes a little time.  You know: face to face time.  Looking into each others’ eyes?  Holding hands, maybe?  Actually talking about our day?  It’s not enough just to work our butts off and sleep in the same bed.  Sleep in the same bed?  Couples aren’t even doing that any more!

Here’s one of my quotable quotes: I figured if I’m going to married, I may as well enjoy the journey.  Well, ah, that’s going to take a little investment then: in each other.  Does sitting next to each other doing Facebook on each of our respective laptops count as couple time?

Katherine Rosman, in her article referred to above, has an interesting quote on this.

One evening this week, my husband and I had a discussion that mirrors others we’ve had over the past few years. “Sometimes, it’s like you’re here and you’re not here,” Joe said to me. “Your mind and soul are in cyberspace, and all we’re left with is the husk.”

He should know.  His wife, the writer of the article, writes about pop culture and modern technology, including social media, for the Wall Street Journal.  She works some from home, so she often finds herself in her family’s presence, but lost in another world.

I know I’m online far more than I need to be for either work or child care. Sometimes, I mindlessly find myself logging on to Facebook and staring at photos I have posted of my children when I just as easily could be staring at the real thing. I’m not proud to admit that.

“I just as easily could be staring at the real thing?”  Ouch.  How about “playing” with the real thing?!  Or “talking to” or “teasing” or “reading a story to?”

Her husband commented to her on these people his wife is meeting online:

The problem is, if you were talking on the phone to these people, at least I’d hear one side of the conversation. When you talk to people online, you disappear into the computer.”

She goes on to write if she’s on the phone, at least her loved one’s can hear one side of the conversation.  When she’s conversing via her computer keyboard no one in the family knows what she is doing.  She writes:

And as we tell our 5-year-old, when you tell secrets in front of people, it can hurt their feelings.

She’s got that right.  When you are lost in another world with your family sitting right there, you are conveying to everyone else you are bored with them.

Wouldn’t that be a kicker:  Being superficially close to people online and being far away from the people right in front of you? 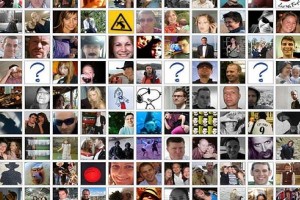 I’m envisioning future therapy clients.  Tell me about your childhood.  Well, I was neglected as a child.  I grew up in front of my mother and dad.  They were there, but they were never there, lost in Facebook.

Funny.  They related to everyone else but me…