Last Saturday I had a few appointments scheduled in the morning and before I left Mary Sue said to me, “Hey, it’s really nice out and the leaves are turning.  We should take the motorcycle out to Ledges and check it out.”  Cool.  What a great idea.

We have two old motorcycles: a 1995 Kawasaki Vulcan 1500 and a 1986 Honda Shadow 500.  One of my sons had the 500 back when he was in high school and when he moved away, I bought it from him.  When I bought the Vulcan a couple of years later, I decided to keep the 500 because I could only get $1500 for it and it’s nice having an extra one in case one of the kids is home and wants to go with us for a ride.  We also bought a 8 X 10 trailer, big enough to haul them both, so we can take them when we go camping. 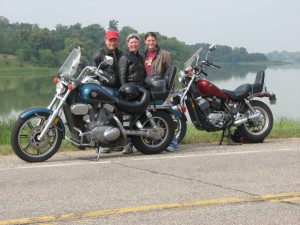 Here’s an earlier picture of the two motorcycles when we went camping along Green Lake in Spicer, Minnesota. Our daughter, had just passed her motorcycle permit so we were exploring the back roads NE of there. Lots of little lakes and towns dot the landscape.

I’m amazed at how many couples tell me they don’t have anything they do for hobbies together.  And then they wonder why they drift away from each other.  Hey, let’s find some things we both enjoy!  Fortunately, for me, my wife loves to ride motorcycle with me (on the back.  She’s not interested in riding it alone!), something we did when we were dating over 37 years ago!  I wish I had that bike still.  It was a 1965 Honda Dream 150.  It’s a classic today.  Can’t hardly even find them on the internet.  I bought it from my uncle, who had bought it new.

Here’s a picture of a Honda 150 Dream like the one I had, complete with the red seat. I sold it for $175. It’d be worth thousands today.

So I’m hanging on to these two.  Neither of them costs hardly anything to run.  The Honda 500 gets 60 miles per gallon and the Kaw gets 40-45.  I change oil every year.  Insurance is less than $100 per year per bike.  The Honda is nearing vintage status being nearly 30 years old and is still in great shape. The Kawasaki was the last year for the Vulcan with carburetors.  It’s a bygone era and only 18 years ago!

We’re not die-hard motorcyclists.  We don’t have full leathers.  We don’t ride 300 plus miles per day.  We’re lucky to ever do more than 100.  We mostly lollygag around Central Iowa going out for breakfast early on a Saturday and then hitting some of the antique shops in the small towns along the Iowa countryside.  Sometimes we just take one the two miles to the Dairy Queen or to HyVee for breakfast.  It’s just nice to have the wind in our hair.  Many times we’ll just ride around area neighborhoods for 15-20 minutes and putz around at 15-20 mph.

Here’s our neighborhood on Saturday, right before we left for Boone: 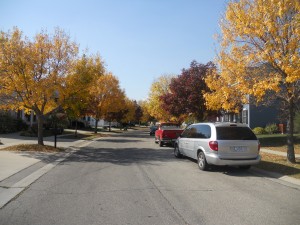 This is the street to the south of our house. If you look closely the trees alternate between purple and gold. Somebody was planning ahead.

Our favorite is riding in the fall.  It’s crispy out.  We have to dress warm, but the air smells so fresh and invigorating.  Seeing the farmers out harvesting in the fields, it’s easy to see how gracious the Lord is to us.

We usually do the Boone/Ledges State Park trip several times each year.  Boone is about 15 miles west of Ames.  We take the back roads to Boone from the North end of Ames and then cut through Boone from County E26 on Story Street.  Story Street is the main drag going north and south through Boone.  The county roads are closer to the scenery and crops than Highway 30 with it’s wide, four lanes.

Boone originally began as a coal mining town, heavily dependent on the railroads that went through town both north and south and east and west. Boone’s claim to fame today is the original home of Dwight Eisenhower’s wife Mamie Geneva Doud (The only wife of a president so honored with a historical site other than Abigail Adams.  I’m sorry, I couldn’t find a website for it.), the Boone Speedway with races every Saturday night (We can hear the racers when camping at Ledges State Park 3 miles away as the crow flies.), Ledges State Park (see also here), the Scenic Valley Railroad and Museum, Redekers’ Furniture Store, and the home of Fareway Grocery Stores (the first Fareway opened there in 1938 with  T-Bones at 25 cents per pound!).  There’s a Boone Visitor’s Center along Story Street near Redekers where they have more information on these items and other highlights.

One of our favorite stops is the Whistle Stop Cafe.  You can see our pic below and comments.

Story Street goes right through town north and south, passes through downtown and then along a residential area with grand homes from Boone’s historic past.  After the beautiful homes you’ll come to Redeker’s on the south end of Story Street on the East side.  Redekers is a regional furniture store, in business since 1930.  We’ve lived in Iowa since 1985 and nearly all of our furniture has been bought there, including the furniture at the Ames office.

Here’s some highlights of our motorcycle trip: 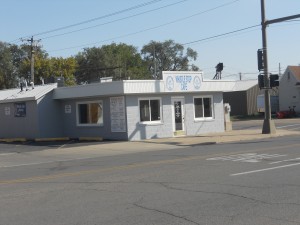 The Whistle Stop Cafe in Boone. This has been a favorite breakfast stop for us for a number of years. They are only open til 2 PM (closed Sundays and close and 1 PM on Saturdays) so you have to come early. It’s pretty small and seats most everyone around a 3 way counter and a few booths. Note the name of the cafe has a railroad theme and is just a stone’s throw from the railroad track. 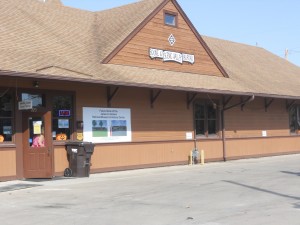 We stopped at the Scenic Railway and Museum to take some pictures for this blog. They have scenic railroad trip here that heads west across the Des Moines River, which is beautiful, especially this time of year. There were a lot of people waiting for the next train since the leaves are so pretty this time of year. 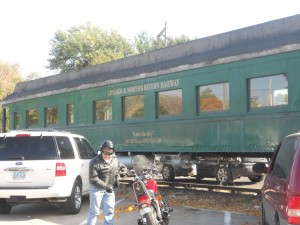 Here I am in a not so flattering pose taking off my  jacket and helmet so we could go into the museum. You can see our little Honda. Mary Sue was cramped by the end of our 50 mile trip. She’d prefer the bigger one and save the Honda for little trips around town.  The Kawasaki was in the shop. 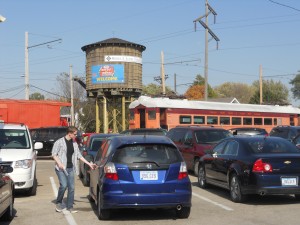 You can see some of the historic structures here. They are constructing a new railroad museum. On Saturdays they use their Steam Locomotive which was made in China and is one of the only ones still operating in the United States. China used steam until 2004.  Most locomotives are fueled by diesel now. The Steam Locomotive is another walk back in time and now only used on tourist trains. 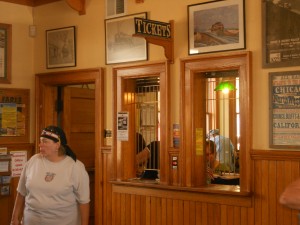 The ticket counter looks like it did 50 years ago, as does the decor of the entire inside. They had a snack area, museum, store, bathrooms, a waiting area (of course) and 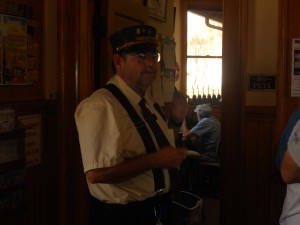 a real live conductor!  The Railroad runs from Labor Day Weekend to October 31st at 1:30 each day and a 4 PM on Saturday.  There are dinner trains on Fri and Sat night from Mid April to Mid November as well as Dessert Trains on Saturdays at 12:30.  Rates for the regular trips are $20 and for the dinner train is $55 per person.  Reservations are a good idea. 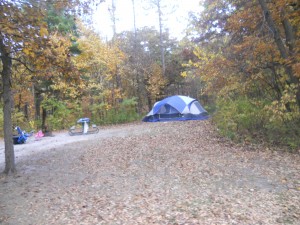 Next we headed to Ledges State Park just south of Boone. It’s named Ledges because of the rock outcroppings overlooking the Des Moines River Valley. It’s gorgeous, but is only reached by hike. We were just on the bike today so no pictures of that. It’s worth the hike, though, a beautiful place to eat a picnic lunch or just chill.  Bring your camera.

The trees and the woods smelled and looked so beautiful and relaxing. However, they close the bathrooms and water soon due to cold weather coming in. 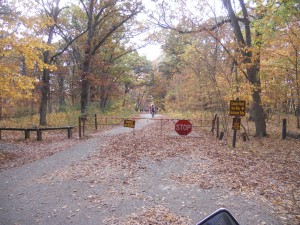 Sadly, this trail used to be open to cars and motorcycles, but flooding wiped out the road. Not sure if they will ever fix it. The road crosses the creek several times with beautiful cliffs overlooking the valley. It’s a great place for a picnic and to let the kids wade in the water. The day we were there we saw about 30 to 40 cars lined up as people had parked above and walked down to enjoy the scenery.  It’s about a 1/4 mile hike to the creek bed.

We go out to Ledges quite often in the evening at dusk to see and count the deer.  The most we’ve ever counted is 54.  That was a few years ago.  Lately we’re lucky to see 20.  Not sure why the drop in numbers.

Ledges State Park is a great place to camp or day-hike, to sit and chill, grill a lunch or just to drive through.  Put it on your list.

To see Dr. Bing Wall’s other blogs on Dating in the Fall click here.