Okay, I’m a little weird.  Why would you care if I get 300,000 miles or a 1/2 million or whatever on my car?  Because if I can do it, you can, too.  Transportation takes a significant chunk of all our checks and for most it’s just money down the drain.  But, hey, if I only spend about $1200 a year on maintenance for the last 6 and 2/3rds years, that saves a ton of money.  Compared to the average car payment of nearly $500, I’m saving a considerable amount each month (A common excuse I hear from people to go deep into debt on a new car: “I don’t want the high maintenance costs.”).  Plus, I drive over 20K a year and all that does is run a car into the ground.  No sense spending a lot of money on a fancy car when it’ll be worth hardly anything in a short time.

Here’s a thank you I wrote to my dad, who also drove old beaters until they died.  I learned it from him.  We’ve joked about it for years.  Recently, he had a stroke, is in a nursing home recovering,  (for more details about this family ordeal click here) and can’t remember this kind of thing, so I hand wrote him a note reminding him of our little banter on the topic.  Here’s my note.  See the flier further below:

Like I said on the phone last night I finally got to 300,000 miles on my Lexus.  You and I have been talking about this several years, as you’d had a Buick LeSabre that had 250,000 miles on it when it was totalled in a car wreck.  I’d bragged I was going to beat that and hopefully get to 300K.  Well…I have!  See the attached flier (to readers of the blog, see below) I made.  I took it to Fix It Auto along with some donuts and a case of Mountain Dew.  You should have seen the smiles on the repair guys’ faces.  It was pretty fun.

Thanks for your heritage of not wasting money on cars.  As you told me once, “It’s just sheet mental!”

Love and Miss You,

Bing’s dad and mom, Fritz and Carol Wall, a year before Fritz’s heart attack and stroke.

I made up the little celebration flier below to take to Fix It Auto along with some treats to thank the repair guys for nursing my car along.  I really do appreciate their efforts.  They’ve saved me a ton of money and were always forthright with me and tried to do the economical thing.  Here’s a copy of that little flier:

I’d been anticipating hitting the 300,000 mile marker for months. And when it arrived I missed it! I didn’t see it until 3 miles too late!

Here I am with the Lexus the day it hit 300,000. I asked my wife to take my picture. I’m easily entertained.

He recently had Fit It Auto replace the timing belt, valve cover and oil pressure sensor, preparing for the next hurdle: 333,333 miles or 1/3 of a million!  After the oil leakage work the car is getting 2500 miles on quart of oil.  Mr. Wall is ready to go.

He expresses his thanks to his friends and the hard workers at Fix It Auto and recommends their service to keep your cars running!  You can reach Fix It Auto at 515-232-9398.

I brought the flier above to Fix It Auto along with Donuts and Dew and expressed my thanks.  A couple of the mechanics were around and they let me take their pic: 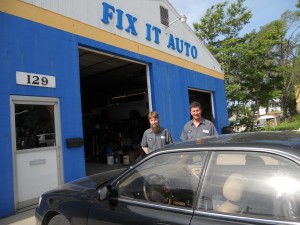 Thanks, Guys, for your hard work!

To see Dr. Bing’s other blogs on money and marriage click here.