This summer I’ve been sharing dating ideas for our readers to consider.  We’ve said over and over that one of the biggest problems couples have in our busy culture is finding time to bond with each other and nurturing their friendship.  Dating each other creates memories and experiences that encourage us to grow in our love for each other.  Couples often neglect this simple thing due to having limited time and end up with time only enough for kids and work.  No.  We need to keep the embers burning, keep our friendship current, and develop common interests over time to combat loneliness, neglect, anger and frustration.  It’s a lot easier to communicate with a spouse you LIKE!  It’s a lot easier to be sexual with a spouse you’ve had fun with.

And please: We’ve got to have more on the dating list than dinner and a movie.  PLEASE be more creative than that!

Our going to a triathlon as a date was our daughter’s idea, as she was training for a Sprint Triathlon, her first, in Maple Grove, Minnesota.  A Sprint Triathlon is shorter than a regular Triathlon.  A regular Triathlon includes three activities: .9 mile swim, 26 mile bicycle ride and a 6.2 mile run.  The Sprint is .3 mile swim, 14 mile bicycle ride and a 3 mile run and perfect for someone like my daughter who was trying to see if she liked it or not.  At the Maple Grove event they also included what they were calling the TriStar111.  This is a new event that originated in Europe that made it’s first appearing at the Maple Grove race.  It includes a 1 K swim, 62K Bicycle course and a 10K run, adding up to 111 Kilometers!  YIKES!

Over a 100o people participated in all three races.  Emilie, our daughter (a school teacher, swim coach and life coach living in the Twin Cities), decided with some friends to train for the event earlier in the summer.  She invited us to watch her.  We had no idea what to expect.  It was delightful.  We concluded that Triathlons would make a great idea for any couple wishing to do something different for a date.  Bring your lawn chairs and enjoy the crowd and the excitement.  I’m guessing most Triathlons have food and entertainment and booths and things for kids to do as the race progresses.  With over a 1000 people racing there was a lot to take in.  On the Trifind.com web site I counted 54 Triathlons in Iowa from May through September for 2011, providing plenty of opportunity to enjoy the great outdoors.  So start thinking about attending one of these in 2012.

The setting for the event was beautiful Weaver Lake Park on Weaver Lake in Maple Grove.  Prior to the event I talked with someone from Ames, Iowa, who also had a child in this triathlon and later she said she never made it to the event!  In order for spectators to reach the staging area, you had to take a free shuttle bus from a business a mile or so away.  This lady didn’t know that!  She ended up going to the Mall of America instead!  I’d suggest if you attend a Triathlon that you check the Triathlon’s web site to see about parking and other information you might want to be aware of.  This one we attended had porta-potties, food booths, business and non-profit booths and activities for children. 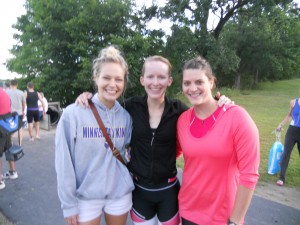 Our daughter, Emilie (on the right), with two friends at the triathlon. The gal in the middle also participated and the gal on the left was there for support. 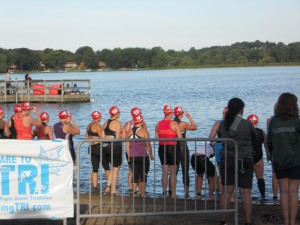 Every few minutes another group of participants would start. The swimming was first. Emilie (in pink and orange) is waiting to start her first triathlon. 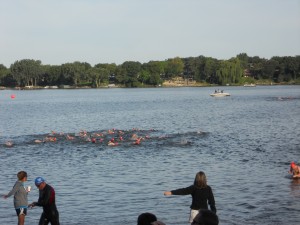 After they are in the water it’s hard to keep track of who’s who. There were different bouys in the water for the different races as well as safety staff on standby (in the boat above) in case of emergency. I was amazed how many people it took to host this event. 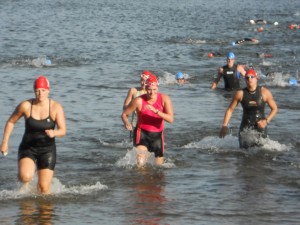 Done with the swimming, now it’s off to the find her bicycle, which was parked about 200 yards away in the bicycle staging area. 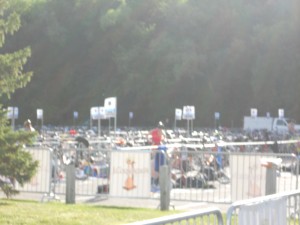 The Bicycle Staging Area was quite a feat in and of itself: over 1000 bicycles, all unlocked within a brarricaded area and staffed with guards. Each participant had a number they wore for entry. 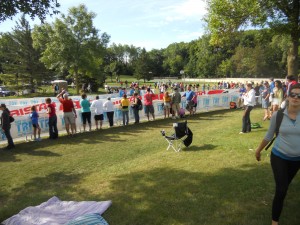 We set up our lawn chair near the finish line and watched the runners come in. Most were exhausted. Some looked like they could do it again! Amazing. An announcer introduced each participant as they finished the race. He entertained us with his banter. 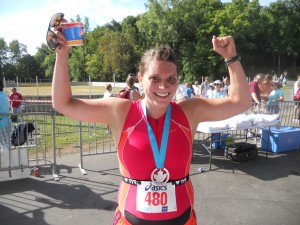 Proud Emilie, after finishing her first Triathlon showing off her new medal. Her goal was to finish under 2 hours and she was well under that.  She’s ready to do it again next year.