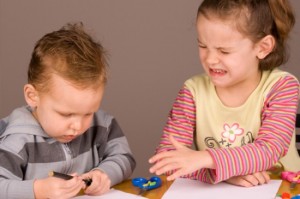 When most people think of a two year old, the thought of a narcissistic spaz comes to mind.  Shouts of NO and MINE tend to echo throughout the day like a broken record. This alone can cause a mother or a father to be pushed over the top. Frustration abounds. A sense of lost control comes upon the parents and the ‘talk’ about not having another child tends to come up sooner or later. “Bob (or Nancy)  . . . I just don’t think I can handle another child.”

Equally exasperating is the thought of your children not behaving when you are not around. Fear and trembling often comes upon parents when they leave their children in the care of others. Of course, some of this fear has to do with worrying about the safety of the children (“I hope they will be OK”), but another part is the fear that your children just happens to be “those children.” Right?

It is so embarrassing to come to pick up your kids and get the report that it is your kids who hit, wouldn’t listen, put glue on Lilly’s head, or wouldn’t share with the other kids.

I would much rather have it be my children who are not shared with or accidentally knocked down due to the other children being too hyperactive. This way I get to look condescending upon another parent.  Well  . . . I guess I don’t go that far, but we are all tempted in our own ways. What I am really getting at is, it is easier being on the opposite side of the apology.

It just stinks feeling like you’re a bad parent, but that’s what it often feels like when you’re consistently having to apologize for your kids uncouth actions. Telling yourself and hearing from others that they will grow out of it or they are just acting their  age is only comforting until they start freaking out again.

At this point the infamous “Why” normally comes out: Why can’t you just behave, listen, share, stop crying, grow up?” etc, etc . . The problem with the “Why” question to most kids (and adults) don’t have the foggiest idea why they did it.  Have you actually ever gotten a satisfactory answer? “Well mommy, I thought it would be hilarious to pour glue on Lilly’s head. Seeing as my psychologist has taught me that I have an object permanence problem, I forgot that you existed, so I was sure I would get away with it.” I once asked Alyas why he did something and after looking at me very intensely he said, “Well . . . you know, cats say m-e-o-w.”  WHAT! Where on earth did that come from?

Part of the problem why parents get into these situations is because they have a passive approach to parenting. What I mean by this is they wait until the kids do something wrong and then they try to correct it. That’s just insane if you ask me. This is like throwing your teenager into a car and then chastising him on his driving after he smashed into the neighbor’s car: “Go to your room young man!” If you wouldn’t train your teenager to drive this way, then you shouldn’t train your young ones this way either.

The active form of parenting is to practice the action desirable often within the home. I don’t wait until my kids are put into a situation where they have to share to learn how to share (or other actions). I create the situation in an environment that I can control and teach them how to do it before they encounter the real situation. This is how my dad taught me how to drive. He took me to a parking lot and instructed me how to put the car in drive, etc. I have simply taken this philosophy and applied it to my young kids. Guess what?  It works!

Just yesterday, Alyas was outside playing with the neighbors. He was on the swing when the neighbor girl began to cry about wanting to swing. Without any prompting on an adult’s part, Alyas jumped off the swing and said “your turn.” Again, earlier today my daughter, who is 19 months, was wearing my shoes around the house. Alyas said, “Can I have a turn?’ Without me even being in the room, my daughter stepped out of the shoes and Alyas jumped in them. Cool.

Of course, this doesn’t always happen, but I find they share really well for a 19 month and a 3 ½ year-old.

So how have my wife and I trained them? My wife and I often take them into a room and have them take turns doing something or playing with an object (stacking blocks is a great). When they share, we praise them loudly. When they don’t, we give them another opportunity with an if/then statement. “If you don’t share, then you are going to lose the toy and your bother or sister is going to be able to play with the toy all by themselves. If you throw a fit, then you are going to the cry corner  and you still don’t get to play with the toy.” More often than not, this does the trick.

We practice this all the time. I do it several times a week (more so in the past). In fact, I did it the other night. This time, I had two balls. I would throw one and LydiaSue was to go get it. I would then throw one to Alyas’. If either one touched the other ball, he was not allowed to play ball anymore. Guess what? They had a good time and no one had to stop playing. A couple of times they went for the other ball, but then backed off. That’s pretty good.

I started this with Alyas when he was really young. I gave him a toy and asked for it and said “share” (I have also done this with LydiaSue). Slowly he got it. Likewise, when they are around other children, I sometimes ask them to go offer their toy to another child even if the child is not asking for it. The other child normally takes the toy as well. If LydiaSue or Alyas stubbornly hold on to their toy, I will take it from them for a few moments and then ask if they want to share it yet.  During cookie time, my wife gives, lets say, LydiaSue a cookie and tells her to go give it to Alyas. After LydiaSue accomplishes this she is loudly praised and receives a cookie herself. If she takes off running and tries eats the cookie on her own, she looses out on eating a cookie.

Now this is just one example. I have also used this method with teaching them to sit still.  How I did this is I have them just sit on the couch while I do something in the other room. I start off with a short amount of time and slowly increase it. I praise them and reward them if they do as I ask; I take stuff away if they don’t. It’s as simply as that.

Another way this philosophy is playing out is with building my son’s confidence in his actions. I want to teach him how to face failure in a healthy way.  I have been noticing him being reluctant to make a choice and this results in him under performing. Then after he under performs he beats himself up for failing. So, for example, he was really struggling counting from 11-20. He would get really mixed up around 14-17. He kept being scared of getting it wrong that he would second-guess himself. It would paralyze him.  I told him he needed to be confident in his actions. He just had to give it a shot even if he made a mistake. I told him making the mistake in this context is not as bad as sitting in fear. So I started counting from 11-20 in a confident voice clapping rather loudly. I then told him to do the same. He proudly started yelling and clapping and before long was nailing it.

I stared doing the same thing with baseball. I told him he needed to swing with confidence. Before any pitch I would say, “Swing with confidence.” I told him I did not care if he missed the ball if he committed to his action to swing. I would only correct him if he held back in his swing. Before long, he was knocking them out of the yard and not getting frustrated with missing the ball. He ended up saying, “that was a good swing right, Dad” even when he totally missed the ball.

I am now experimenting with LydiaSue. I have found that if I tell her to make a choice and loudly praise her even when she gets it wrong followed by a correction in the content (“No, this is two, not one.”), she is more bold in making choices. Interestingly, she is getting more things right too.

In all these examples, I am training my kids now how to act. I am not waiting until Alyas goes out for baseball to teach him about confidence and failure. Rather, I am going to start teaching him right now in my front lawn. The same goes for LydiaSue. While I can’t control everything they do, I can at least set them in the right direction. I want them to be prepared for the world. There are many temptations that can fog their conscience. My job is to ensure they have the right habits to know how to navigate to the true goods.

[Update: As of yesterday, I started teaching Alyas what to do when kids pick on him. I am not waiting until they pick on him.  We spent a good 15-20 minutes role playing.]

Brandon Wall is a counselor in Cedar Rapids, Iowa: http://www.cedarrapidscounselingcenter.com/