Can Marriage Therapists Present a Point of View? 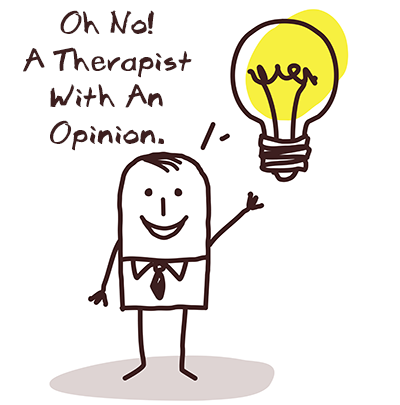 This is another blog in a series from old things I’m finding cleaning out files…past due, no doubt (click Here for the others).  The quote below is left over from my dissertation back in my Ph.D. studies at Iowa State in the 1990’s!  YIKES!  In any case, the section is from an actual interview with one of the subjects.  He and his wife’s name changed, of course.  He’s rather candid in his point of view about marriage therapists, but his rawness gets at some of the frustration other clients who seek marital therapy feel.  Frank presents two contrasting styles he experienced. He’d hoped, instead, he could find a therapist in the middle.  We seek to take the middle ground (listening carefully, giving feedback and gentle guidance when necessary and desired), but he does a great job exposing the facade of both extremes.

In our efforts to understand our client’s world view, we may, in the process, error on the side of not having one of our own. In one of the interviews I did for my dissertation, Frank commented on the two extremes he saw from professionals when he and his wife sought help during their own struggles. They ended up separating, divorcing and remarrying. Frank was married to Shelly 18 years total. Unfortunately, she died a year before this follow-up interview, which was four years after the first interview:

Frank:  On the one side you go to marriage counselors who seem to take a totally morally neutral stance toward marriage and loyalty and commitment to that marriage. And then on the other hand you go to this pastor that I went to who seemed to think that if you weren’t just some sort of single minded moron that you were a moral failure and a sinner in God’s eyes. And I really wanted to flip the guy off, I really did. He was a man of God and a pastor, but I thought he was the biggest jerk I had ever seen in my life. He starts quoting Bible passages and I think, “What an idiot.”

And then I go to this other character, a marriage counselor, who seemed to think, “Wow, whatever makes you happy. Whatever turns you on” was his attitude. “Wow, if you think you ought to stay together, that’s cool. If you think you want to see other people and be married, hey, far out,” you know, it was like George Carlin was our marriage counselor. “Do you have a point of view or what in the hell am I paying you sixty-five dollars an hour for?”