Dr. Bing’s Comments on Quotes (003): In Praise of Male-Female Differences 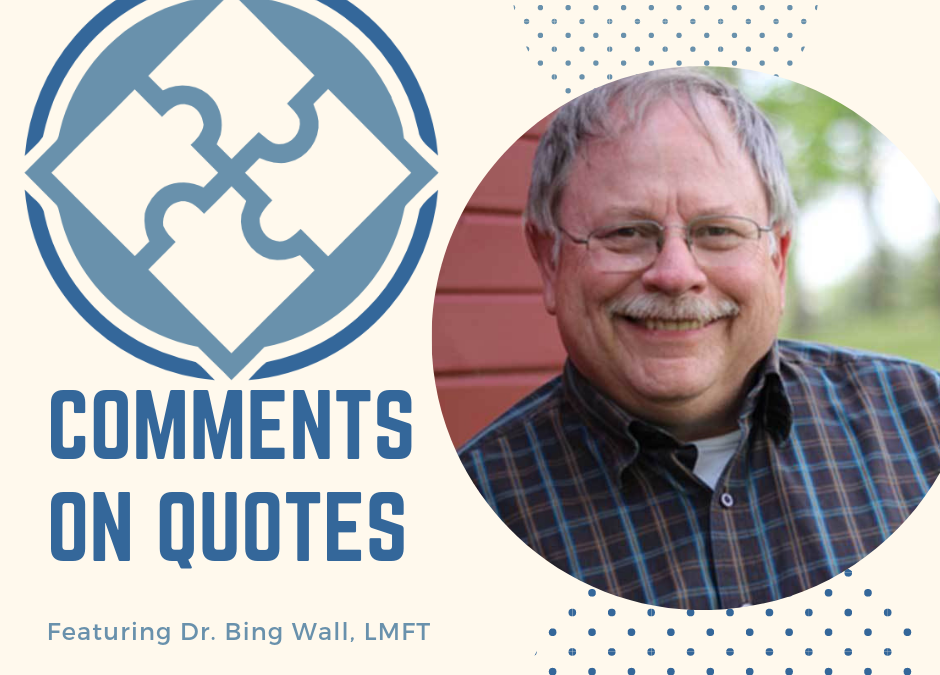 “Where there is a withdrawn or silent man, there is usually a critical woman.”

Steven Stosny and Patricia Love, How to Improve Your Marriage Without Talking About It 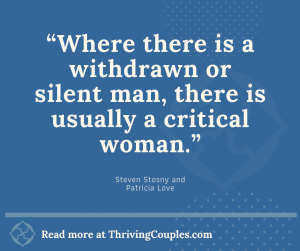 First off: this quote is a bit unfair.  There are certainly men who simply aren’t chatty, no matter who they are talking to.  And there are wives who are good at expressing their opinions in ways that are engaging and helpful and insightful and their husbands are totally fine.  What this quote is talking about are those situations that get a little off kilter. One of the biggest complaints of wives I hear is their husband’s won’t talk to them.  One of the biggest complaints of husbands is their wives are never happy. The more he feels she’s complaining, the more criticized he feels, the more criticized he feels, the more he quits talking, the more disconnected she feels and around and around they go.  This is why marital counseling can help: with a third person there he or she can help you get outside yourselves and look down on this pattern. You can look at it objectively and instead of blaming each other you can start to figure things out. Or, you can divorce each other, marry somebody else, and do the same thing.

The average wife speaks two to ten times more words a day than her husband.  Certainly, there are exceptions to this “average” where some guys are more talkative than their wives.  But let’s look at the more common pattern:

When they are dating these two differences are appealing.  He likes it that she gabs about these simple things and helps him see things he’s never seen.  He thinks it’s cute. She likes how she feels secure in his strong demeanor, that there’s something about his quietness that feels reassuring, even safe.  But human nature is such that every good personality trait has a bad, opposite personality trait to go along with it: He’s pleasantly shy, but he’s rude; she’s engaging, but she’s obnoxious.  When you marry each other you have to take the good with the bad.

A lady once told me she was divorcing her husband because he wouldn’t talk to her.  I knew her husband and pointed out to her that her husband was a pretty shy guy. She said, “I don’t care. I’ll find a guy who will talk to me.”  I feel sorry for that guy, if she ever found him.

Whether we talk or don’t talk, a little mutual respect would be good.  We could all probably use a little of that. It’s good men might not have to talk about everything, but work hard even when it’d be easy to give up.  It’s good women like to explain what they are feeling and work out what’s rattling around in their heads. Some wisdom and solutions can float to the top.  We can connect around silence or talking. We can disconnect around silence or talking. Neither is good or bad. The attitude you bring to the table, whether you are him or her, might be the more determining factor.